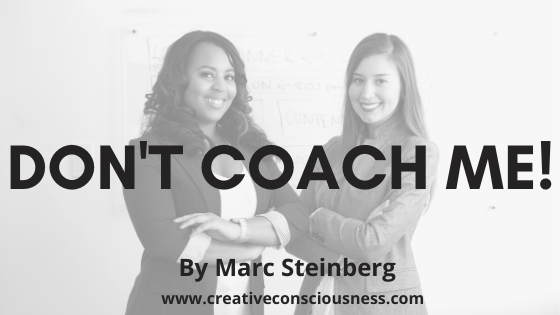 “Did I ask you for coaching? Just talk to me normally, will you!”

I don’t know if you get sometimes reactions like that, whether you are a coach or not? People, in general, don’t like it to be intruded with game-changing energy. They want you to confirm them in whatever stuff they are internally sitting in – it’s called remaining undisturbed in the comfort zone.

“Ok, you get upset when I share with you that I believe you have the power to change. So? Who gets upset? The victim inside, the comfortable, the lazy, the risk-avoider?”

“Oh, you don’t want to change? Well, sorry for not buying it.”

That’s usually when people decide that we (you, me, all change-makers) are too confronting. No problem for us, or is it? Should we play their game? We can’t, can we? Not without a breakdown in our authenticity. And that price is always too high, no matter what.

So, not to coach? Not to challenge the status quo?

I am clear on not compromising my authenticity and integrity, however looking for maybe a Trojan horse? And I found one!

What if one could transmit the energy of change undercover so that it isn’t subject to be dismissed and perceived as attacking the mindset of the “socially normal”?

In my way of coaching, we create a context first before we deliver content. So instead of hammering on the door of the other we politely ask questions that are non-intrusive and create an atmosphere of interest and openness. That ‘atmosphere’ you can also call ‘context’. Once that is in place the possibility for change is created.

This approach is part of the philosophy and curriculum I developed known as “Consciousness Coaching®”. It is an art to be learned because the road to context is slippery and mined. Too many tricks of the Ego are on stand-by to prevent any context for change to be established.

In Consciousness Coaching® we teach step by step where the slides and the mines are and how to disarm them. In the end, there is only a win for all of us: you, me, the other, society as a whole.

The current ‘COVID-times’ pressed me to dare to take my Consciousness Coaching® training online. I was concerned that it may not deliver on its in-person power, but it does. Not only almost, but fully. So, I’m going all out to provide for all of you the possibility of becoming a real Consciousness Coach®.

And together we will change the world.

DO THE FREE TEST

With our Personality Test you find out in 5 minutes what mindset you are operating from; knowing this is key to make changes in your life from inside out. You get your test result not via text but via a video from Marc Steinberg, founder of Creative Consciousness®, created specifically for your mindset type!